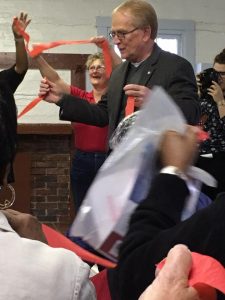 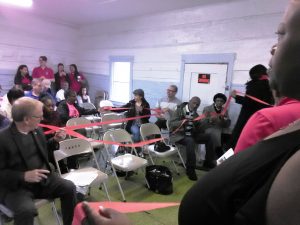 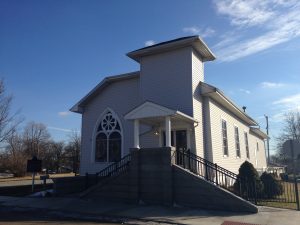 Shaffer Chapel (built in 1893) and the Rev. John E. Johnson:
Shaffer Chapel, located in the heart of the Whitely neighborhood in Muncie, is listed on the Indiana Registry of Historic Places. Built in 1893 as a public school building, it was later purchased by the Shaffer Chapel African Methodist Episcopal Church. In August of 1930, a lynch mob in Marion, Indiana, hanged two African-American teenagers accused of a crime. The Rev. John E. Johnson (1884-1931), pastor of Shaffer Chapel and a mortician, drove his hearse to Marion to retrieve their bodies. He was escorted by Delaware County Sheriff Fred Puckett and the Indiana State Police.  The Whitely community held an all-night vigil at Shaffer Chapel to prevent possible rioting. Police were on duty to turn away curious onlookers and others with malicious intentions. The Rev. Johnson was able to embalm the bodies and return them to Marion for proper burials by their families 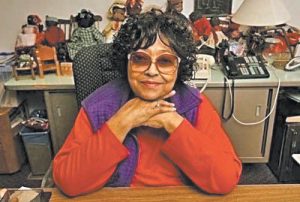 Beatrice Moten-Foster was born in Selma, Alabama in 1938. She was active in the Civil Rights movement and later achieved many firsts for African-American women in radio, television, and publishing.  Upon moving to Muncie, she founded The Muncie Times, the area’s only African-American owned newspaper. She promoted education, was a community activist, helped to establish a Muncie Chapter of Indiana Black Expo, helped launch the Muncie Coalition of 100 Black Women, and founded the Martin Luther King, Jr. Dream Team.

Dr. Robert O. Foster was born in Muncie, Indiana in 1932.  He attended Longfellow Elementary School and earned a Master’s and Doctorate degree from Ball State University.  In 1956, he was appointed principal of Longfellow, the first African-American to serve as a school principal in Muncie’s history.  He was a community activist involved in diversity and poverty issues. He oversaw BSU’s Diversity Program and established BSU’s Minority House.

“Miss Bea” and Dr. Foster passed away within weeks of each other in 2011. It is with great pride and gratitude that the MLK Dream Team adds a marker to the Walk of Fame in their honor.

Harvey Thomas (1884-1931) and Pennie Maxine Thomas (1925-1998):  Harvey and Pennie Thomas were natives of Cairo, Illinois.  Harvey graduated from Tuskegee Institute and was valedictorian of his class.  He served as a captain in WWII.  Pennie was a graduate of Harris-Stowe Teachers College in St. Louis.  Harvey and Pennie established a dental practice in Muncie after Harvey earned his Doctorate of Dentistry in 1952. Pennie earned her master’s degree from Ball State University.

Harvey and Pennie were lifelong advocates of education and devoted countless hours to the Muncie community, serving on many boards and advocating for others. Pennie served on the Board of Trustees of Ball State University. In 1979, she was honored as one of Muncie’s Most Influential Women. Harvey founded the Huffer Memorial Children’s Center and served as its president from 1964-1975. Working with Dr. Louis Icerman and the Kiwanis Club, he also helped to establish the Icerman Dental Clinic, which provides dental care to students in need. Harvey and Pennie were named co-recipients of the
Very Important Volunteer Award (VIVA) for Lifetime Achievement in 1997.

Honorees included in the 2011 unveiling event: